Project workflow may be used to restrict who is able to change the status, what they are allowed to change it to and at what point during the lifecycle of an issue.

Workflow is managed through tables, with the rows determining which Field Conditions to use, the columns determining which project roles they apply to, and the cells within the table determining what the new values can be.
It's a little similar to the tables used in Field Visibility - except instead of having "Allow/Deny/Not Set" in the cells, it is instead the allowed values of the form field.

This example table below lists the statuses each project role is permitted to change to, at each stage.

In this table, the cells down the left colum are field condition sets. The top row is my project roles.

I then repeat this a further five times, one for each of the remaining statuses.
So I'm left with a table using six field conditions, one for each status.

From the dropdown list, select the form field you wish to control the options for. Note that STATUS and ASSIGNED TO are available options. Once selected, click Add Rule For This Field. 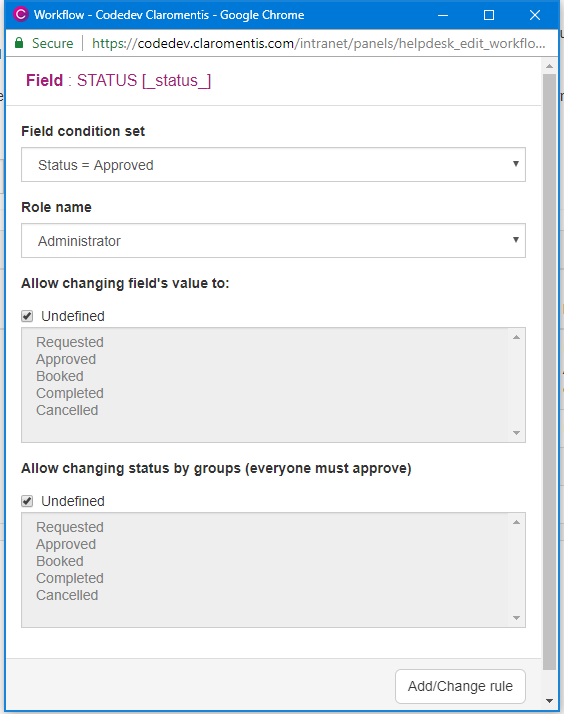 Field Condition Set: Choose the Field Condition that should apply to the rule.
Role name: Pick the role to apply the rule to. It's likely that you'll need to go thorugh each of the roles in this list separately, deciding for each what they should be allowed to do.
Allow changing field's value to: For the currently selected role, choose the options that should be allowed when this field condition applies. Hold the CTRL key to select multiple options.
Allow changing status by groups: Use this if you need more than one person to approve a change. See below for more information.

If you are adding a workflow rule to a user picker, such as the Assigned To field, you will need to pick individual users. However from version 8.5 (Sept 3rd 2018) onwards, you will be able to pick groups, roles, and project roles.

This gives the following approval table on a submitted form: 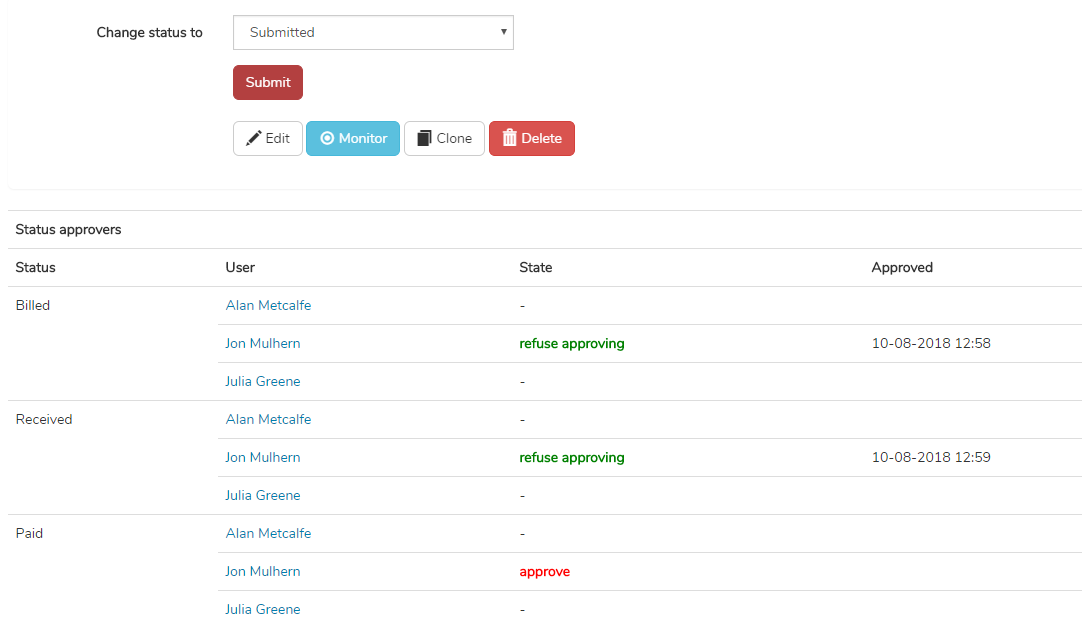 You can see that there are three possible approvers in the role.
I have clicked 'Approve' on Billed and Received (which is why I am now given the option to 'refuse approving') but I have not given my approval for the status to move to Paid.

If Alan and Julia also come to the form and approve billed or received, the form will then automatically change status.