Triggers are similar to field condition sets in that they are denoting conditions under which something should behave in a specific way. The difference is that triggers may be transitional states. Difference between condition sets and triggers:

Triggers can be used to control dynamic field changes (auto-populating a field) and notifications.

Tick to specify which rule (or rules) you would like to include. 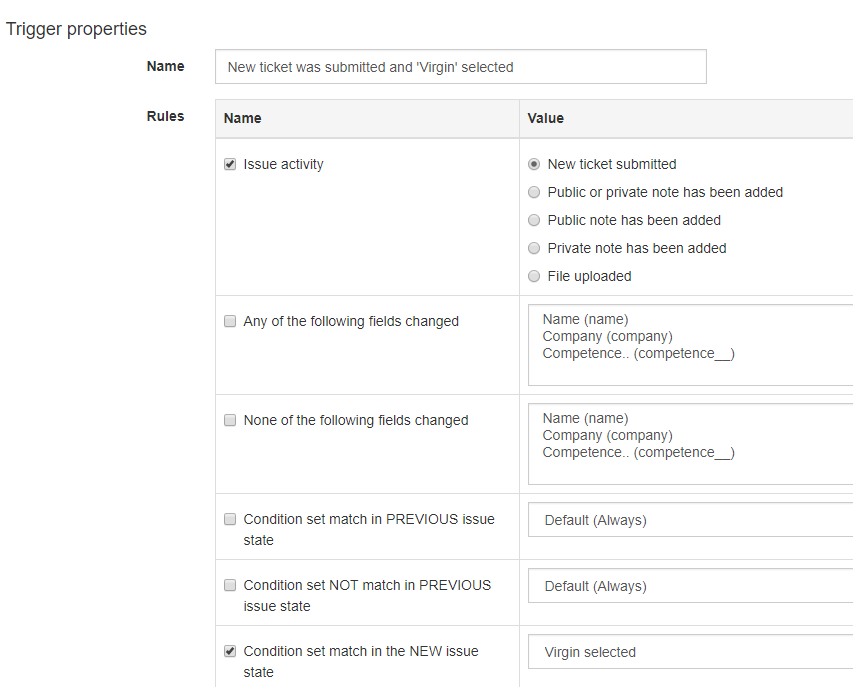 There's five possible choices here, explained by their names as you can see above.
The trigger can fire only if it's a new form being submitted, or if notes or files are added.

As above, you'll see two rules available that look for a change in a field - or no change!
This is useful if you want to keep an eye on a particular area of the form.
Let's say someone edits the form but changes a date field called 'needed by', you might like to receive a notification email when that happens.

These rules are used for looking at field conditions, and whether or not they are or were true or false.
Here's the simplest way to explain the four:

It's generally good to use condition rules as pairs. Let's say I chose to have Condition set match in the NEW Issue state = Virgin Selected
As my form moves through its various statuses, every time the form is saved or changed, that condition would still be true and the trigger would 'fire' every time. I might then receive an email notification every single time the form is changed!
So it's important that I only want to be looking at the exact point at which that change occurs. So, I want my trigger to look for the change from when it wasn't true that Virgin was selected, to the point at which it is true that Virgin's been selected. That way, my trigger would only ever fire once.
I would create a trigger with these rules:

Another example: Let's say I'm looking to receive a notification whenever my form is changed to the status of 'Approved'.
I would create a trigger that states: